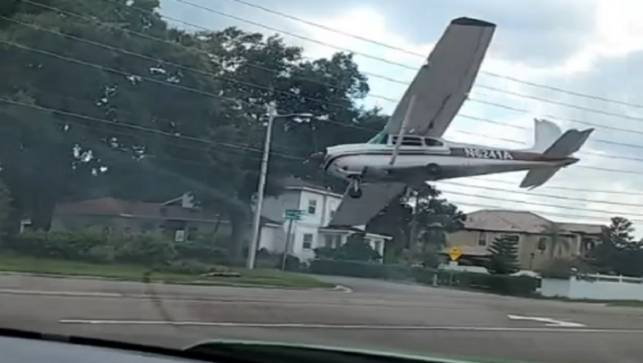 A Cessna plane crash-landed on a road in Orlando, Florida, on Friday. The pilot managed to escape without injuries.

The 40-year-old pilot, Remy Colin, from Longwood, brought the plane down after suffering a mechanical failure. He tried to land the aircraft in an area that would minimize damage to pedestrians.

The plane ran out of fuel mid-flight because a faulty gauge incorrectly informed the veteran pilot that he had an hour and a half of fuel left.

During his instrument testing in the air, he realized he only had about 30 minutes of fuel and attempted to use the radio, which was also malfunctioning.

Perhaps most interesting, when coming in to land the plane, he noticed that if he did not stall it where he came down that he would have crashed into a busy intersection with hundreds of cars, so when he dropped the plane, he aimed for a driveway off the side of the road.

Resulting in the plane being crash-stopped by two palm trees. He suffered a hit to his head but jumped right back into action the next day—flying banners for his commercial aerial advertising business.

A video posted of the crash landing is below:

Everyone is safe ! A 1956 Cessna 182 Skylane went down on University Boulevard and Econ Trail in Orlando Friday due the engine failure.

It is being said , aircraft was on a maintenance flight at the time of the crash landing.