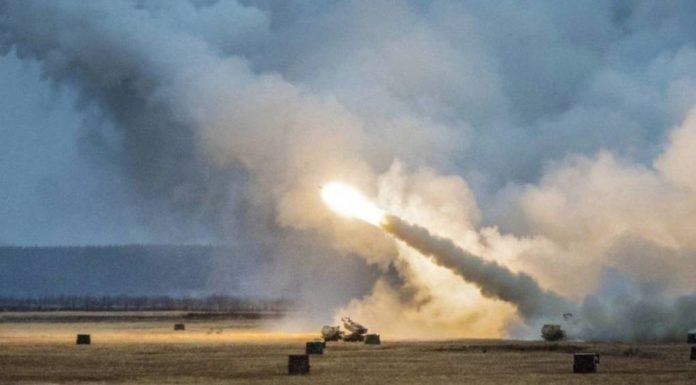 Putin launched the invasion of Ukraine on February 24, drawing swift international condemnation and global backlash. The U.S. and NATO allies have rapidly provided billions of dollars in military and humanitarian aid to Kyiv.

The U.S. has sent four HIMARS anti-tank missile systems to Ukraine as part of a $1 billion aid package. The Russian foreign ministry has criticized Western arms supplies for Ukraine and has said they will prolong the conflict.

Putin and other top Russian leaders have justified their invasion of Ukraine by saying that the country is led by Nazis.

HIMARS have arrived to Ukraine.
Thank you to my 🇺🇲 colleague and friend @SecDef Lloyd J. Austin III for these powerful tools!
Summer will be hot for russian occupiers. And the last one for some of them. pic.twitter.com/BTmwadthpp

The United States will send another $450 million in military aid to Ukraine, including four High Mobility Artillery Rocket Systems, 18 tactical vehicles, 18 coastal and riverine patrol boats, thousands of machine guns, grenade launchers, and rounds of ammunition, and some other equipment and spare parts.

The U.S. has committed more than $6 billion in security assistance to Ukraine since the war began, including this latest package of $450 million.