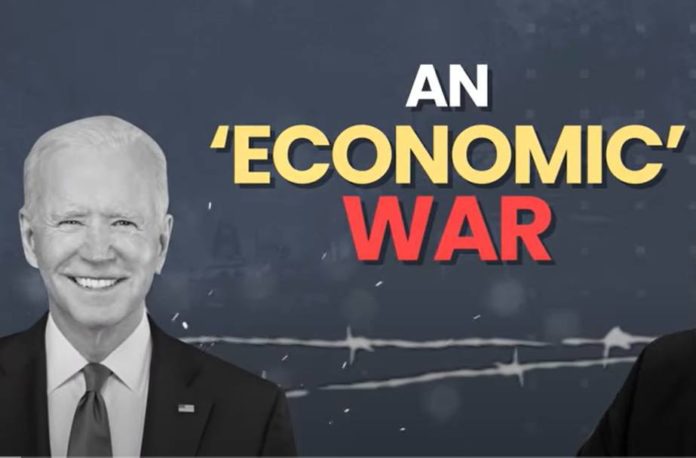 How the Treasury Department is waging economic war on Russia

Three months into US-led sanctions designed to crush Russia’s economy for its war in Ukraine, Russia has appeared surprisingly resilient. But inside the Treasury Department, teams of sanctions experts view that resilience as a mirage and remain confident the sanctions are working.

As top US military officials watch the hot war unfold in Ukraine, a new era of economic warfare is underway in the Treasury Building. The maneuvers are coming with relatively little fanfare and will almost certainly lead to Moscow defaulting on its government debt.

Putin continues to suggest that the sanctions aren’t working, but the accurate indicators show weakness, according to the director of the US Treasury Department’s Office of Foreign Asset Control.

Elizabeth Rosenberg was drafting a classified memo for Treasury Secretary Janet Yellen as the first Russian missiles began landing across Ukraine. She had spent weeks shuttling between secure rooms at the Treasury Building and attending meetings at the White House.

After months of planning and diplomatic negotiations, US officials launched the most comprehensive sanctions package to target an economy of Russia’s size.

The Office of Intelligence and Analysis at the Treasury has access to the same classified intelligence that drives decision-making for US military operations and has been tasked with dealing with Russia since its invasion of Ukraine.

Because of the prioritization of Russia concerns globally, the US is sharing information, intelligence, and law enforcement information with governments and the private sector.

For months, Treasury’s Office of Foreign Asset Control has been finding and preparing targets inside Russia. New directives have immediately followed each new round of sanctions to find new targets, new options, and new strategies to create pain for Putin.

Andrea Gacki, director of the Treasury Department’s Office of Foreign Asset Control, which serves as the tip of the spear for US economic statecraft and her staff expected sanctions to bite over time, but the key ingredient was patience. Now, trans-Atlantic leaders are grappling with rising inflation and soaring fuel costs.

The sanctions have shattered critical supply chains in Russia and are preventing the country from accessing essential technology and components necessary for entire industrial sectors. The economy is now on a path to contract by as much as 15%. The ultimate question is at what cost to our own? Was this worth it?

Putin has spent years building up his defenses, including foreign currency reserves, industrial base and selling Russia’s vast energy resources to the world.

Putin also has something of a secret weapon: a 58-year-old Russian economist named Elvira Nabiullina, who has been leading Russia‘s central bank since 2013.

US officials acknowledge that Nabiullina has done an effective job managing Russia through the initial phase of the sanctions, and that she has raised interest rates, imposed capital controls, and sought holes and workarounds to float an economy under siege.

Treasury has Janet Yellen, who overlapped with Nabiullina and gave her views on what would have the most acute and direct impact on those sanctions.

Yellen delivered a critical message to her foreign counterparts as they considered the dramatic escalation to their sanctions plans, and Nabiullina’s ability to engineer the appearance of stability has drawn fresh questions about the true reach of the sanctions touted by leaders across the trans-Atlantic alliance.

The Treasury Department has built in triggers to undercut Russian actions, and has methodically taken steps to tighten the vise on key economic levers.

The US has prepared secondary sanctions, which would be a significant escalation, but hasn’t pulled the trigger amid internal debates weighing economic consequences and fracturing alliances. The US has also been quietly, but deeply, engaged with its European counterparts to craft a mechanism to cut back Russian oil and gas revenue.