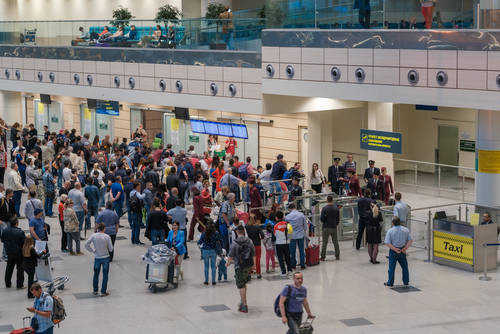 In response to Putin’s order to mobilize more troops, the military is swiftly recruiting new recruits and discontent is spreading across Russia.

He called the decision a “partial mobilization” that only affects a small percentage of Russians with military backgrounds.

The Kremlin has assigned regional governors to oversee the draft and stiffened prison sentences for desertion or refusal to serve.

As time goes on, the decree’s impact becomes more evident. In the past few days, dozens of videos have appeared on social media showing young recruits being sent off to fight.

Onlookers applauded as a recruit was presented with cake for his birthday in Yakutia, in far northern Russia.

Hundreds of miles south of Moscow, in Lipetsk, an Orthodox priest blessed young conscripts wearing civilian clothes as mothers wept. As an officer ordered the group to march, one recruit yelled, “Mom, I’ll come back!”.

Videos showed an argument outside a recruiting station in Dagestan, in Russia’s south.

A woman compares the current conflict to the Soviet Union’s war with Nazi Germany in World War II, saying, “My son has been fighting there since February!”

The man replies, “That was a war, but this is just politics!”.

While the government has assured only those with military service background will be drafted, multiple reports have emerged of draft papers being sent to non-military personnel.

Reports and social media posts showed long queues of cars at Russia’s border crossings with Finland, Georgia, Kazakhstan, and Mongolia amid uncertainty over the scope of the draft.

It is either impossible to get tickets for flights out of Russia or the prices are soaring to countries free from visas, such as Armenia and Turkey.

On the social media app Telegram, a channel claimed to track the real-time movements of recruitment officers throughout the city.

One of the posts states, “Officers at Baumanskaya station are stopping people at the turnstile.”

“There are a number of national guardsmen near the escalator at Park Pobedy station. Be careful, friends,” says another.

Following Putin’s speech, protests erupted in dozens of Russian cities, with crowds yelling “No to war!” and “Putin to the trenches!”

At a news briefing on Tuesday, the Kremlin’s spokesman, Dmitry Peskov, defended the presentation of draft papers to protesters of conscription age.

Activists opposing mobilization have called for further protests this weekend.