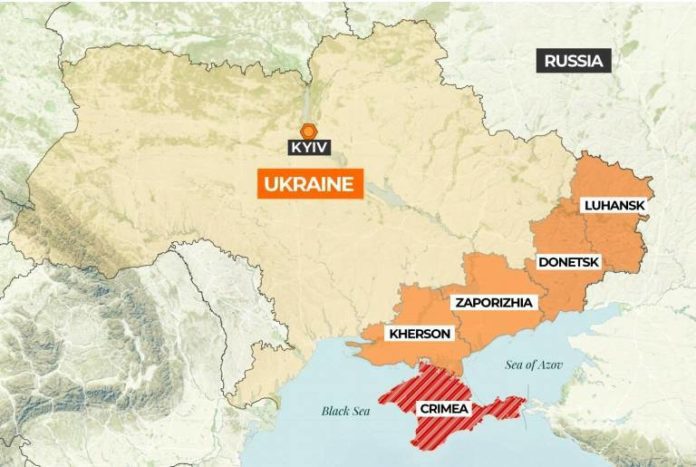 As Putin faced a potential serious military reversal, he proclaimed Russia’s annexation of a swathe of Ukraine in a pomp-filled Kremlin ceremony.

As the largest annexation in Europe since World War Two, the Russian declaration of rule over 15% of Ukraine was roundly rejected by Ukraine and western countries. New sanctions were announced by the United States, Britain, and Canada.

According to Zelenskiy, his country has applied for fast track membership in NATO, and it will not engage in peace negotiations with Russia while Putin is in office.

Russian forces in one of the four regions being annexed faced encirclement by Ukrainian troops at the time of Putin’s proclamation, demonstrating how tenuous Russia’s grip is on some territories.

In one of his toughest anti-American speeches in more than two decades in power, Putin signalled he was ready to continue what he referred to as a battle for a “greater historical Russia”, denounced the West for destroying Russia and accused Washington and its allies of blowing up the Nord Stream gas pipelines without evidence.

U.S. President Joe Biden said it “was a deliberate act of sabotage,” adding that Washington and its allies would send divers to investigate.

Putin said the four Ukrainian regions that Russia is absorbing – Donetsk, Luhansk, Kherson and Zaporizhzhia – have made a historic choice.

“They have made a choice to be with their people, their motherland, to live with its fate, and to triumph with it. Truth is on our side. Russia is with us!” he told the Kremlin’s political elite as he signed the annexation documents.

Kyiv and Western governments denounced the so-called referendums as illegal and coercive.

“We will defend our land with all our strength and all our means,” he added, calling on “the Kyiv regime to immediately cease hostilities and return to the negotiation table”.

Zelenskiy said he would be ready to talk peace only if Russia had a new president.

In addition, he announced that Ukraine was applying for fast-track membership in NATO, something Moscow fiercely opposes, and accused Russia of redrawing borders “through murder, blackmail, mistreatment, and lies”.

Kiev, however, remained committed to coexistence with Russia “on equal, honest, dignified, and fair terms.”

“Clearly, with this Russian president it is impossible. He does not know what dignity and honesty are. Therefore, we are ready for a dialogue with Russia, but with another president of Russia,” Zelenskiy said.