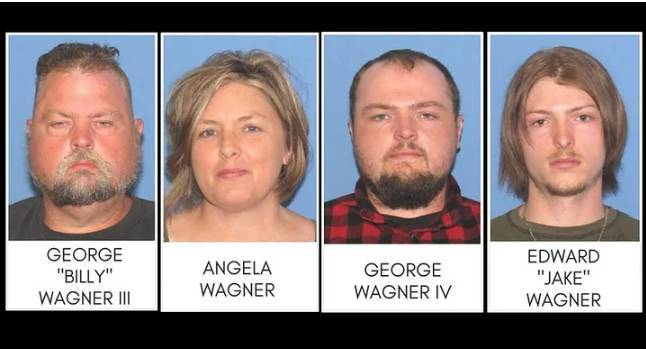 On Monday, jurors heard shocking details about the “Pike County Massacre,” in which four members of just one family massacred eight members of another in dispute over custody of a child.

He will testify against his brother, George Wagner IV, 30, who is the first defendant in the case to go to trial for the 2016 slayings.

In a sprawling rural property near Piketon, the Wagner brothers and their parents, Angela and George “Billy” Wagner III, were accused of plotting to execute eight members of the Rhoden family.

A prosecutor told jurors that Jake Wagner rearranged Hanna Rhoden’s body on her bed after he shot her twice in the head so Kylie, her four-day-old infant, could nurse.

During the rampage, Hanna Rhoden was the main target. Jake Wagner was 20 when she became pregnant with his child and she was just 15-years-old.

Prosecutors allege that she refused to hand over custody of their daughter, Sophie, when she left Jake Wagner and his controlling family.

She told a friend on Facebook, “They’ll have to kill me first,” and three months later, that’s exactly what they did.

Across the street, Jake Wagner is accused of shooting Hannah Gilley, 20, and her fiance, Frankie Rhoden, while their six-month-old son, Ruger, nuzzled between them.

Canepa said Ruger was still lying between Hannah Gilley and her husband when she died, covered in his parents’ blood, because the clothing was positioned so she seemed to be nursing him.

In exchange for a recommended 30-year prison term, she pleaded guilty to helping plan the murder – which she was not present for.

The death penalty will be removed for all four defendants if Angela and Jake Wagner testify to the satisfaction of the prosecution.

According to the defense, Jake Wagner, the prosecution’s star witness, will only serve to prove the innocence of his client.

Jake will tell you that George did not shoot anyone, he added.