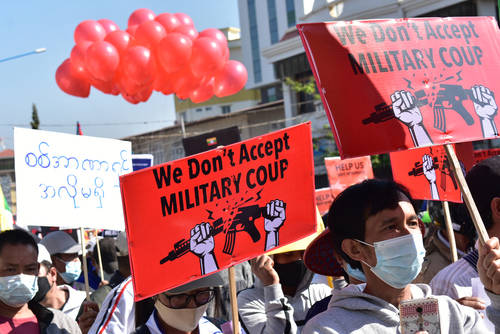 International outrage over Myanmar’s execution of four political prisoners intensified Tuesday with grassroots protests and strong condemnation from world governments. The United Nations said the executions were a “blatant violation” of a person’s “right to life, liberty, and security.”

Myanmar’s government spokesperson, Maj. Gen. Zaw Min Tun firmly rejected the criticism, saying the executions were carried out in line with the country’s law and not for “personal” reasons. He said the executed men were convicted of crimes involving supporting violent “terrorists” and acts, and their punishment was “appropriate.”

The execution of four political activists prompted calls for a moratorium on executions and condemnation for what was widely seen as a politically motivated move.

New Zealand, Australia, the European Union, Japan, the United Kingdom, the United States, Canada, Norway, and South Korea condemned the executions as “barbaric” and a “setback” to the group’s efforts to facilitate a dialogue between the military leadership and opponents.

A military coup overthrew Suu Kyi’s elected government, triggering protests that escalated to armed resistance and widespread fighting. Some in the U.N. characterize the current situation in Myanmar as a civil war.

Myanmar, formerly known as Burma, announced in June that it was going to resume executing prisoners and has 113 others who have been sentenced to death. However, 41 of those were convicted in absentia, according to the Assistance Association for Political Prisoners, a non-governmental organization that tracks killing and arrests.

News of the executions prompted a flash demonstration in Myanmar’s largest city, Yangon, on Monday. Similar protests broke out in more rural areas across Myanmar on Monday and Tuesday.