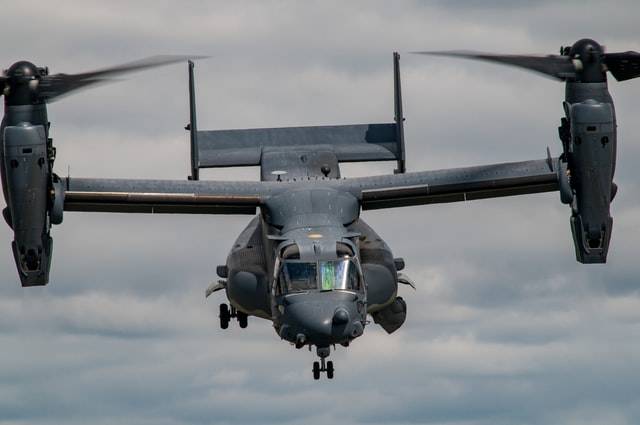 A Marine Corps Osprey, one of the U.S. Military’s most advanced transport aircraft featured in movies like Transformers, Godzilla, The A-Team, and War Dogs crashed near Glamis, California, on Friday, killing at least four people.

The aircraft was an MV-22B Osprey belonging to the 3rd Marine Aircraft Wing.  After public speculation that the craft contained nuclear material.  Military and civilian first responders are on site, and no nuclear material was on board the aircraft, a Marine spokesperson said.  Crews from the Imperial County Fire Department and Installation Federal Fire responded to the fire.

How one of the Military’s most advanced transport craft could crash on a clear day in open space is coming into question.  Osprey crashes are rare, but there are known incidents.

The V-22 Osprey has had 13 hull loss accidents, 46 fatalities, and several other accidents and incidents.

On June 11, 1991, a miswired flight control system caused a plane to crash. The pilot suspected he might have accidentally set the throttle lever in the opposite direction.

On 20 July 1992, V-22 #4’s right engine failed, and the aircraft crashed into the Potomac River, killing all seven on board.

A V-22 mishap was caused by vortex ring state (VRS), a fundamental limitation on vertical descent, which is common to helicopters. The project team added a warning light and voice when the V-22 approached the VRS-vulnerable descent rate.

A Marine Corps V-22 crashed in 2000 after a hydraulic line leak caused a flight control system alert. The pilot’s eight attempts to reset the software failed, and the aircraft fell 1,600 feet (490 m) to the ground.

A Marine Corps MV-22B experienced an uncommanded engine acceleration while ground turning and went airborne, causing damage to its starboard wing. The miswired cannon plug to one of the engine’s two Full Authority Digital Engine Controls was the cause.

A CV-22B crashed near the city of Qalat in Zabul Province, Afghanistan, killing three US service members and one civilian. The investigation found several factors that significantly contributed to the crash, including low visibility, a poorly executed approach, loss of situational awareness, and a high descent rate.

Five people were injured when a USAF CV-22 crashed at Eglin Air Force Base in Florida. The cause of the crash was determined to be pilot error.

Two Marines were killed in a training accident after their aircraft caught fire. The accident caused the Marines to recommend improved air filters and reduced hover time in the dust.

Five crew members were rescued after an MV-22 broke apart while landing on a reef in shallow water 0.6 miles (0.97 km) off the Okinawa coastline of Camp Schwab. Two crew members were injured, and all were transported for treatment.

A Navy V-22 had compressor surges and stalls on its first transatlantic flight. It was diverted to Iceland for maintenance.

A design flaw with the engine air particle separator caused a shock wave in the hydraulics system, causing hydraulic fluid to leak into the IR suppressors and cause nacelle fires.

An MV-22 Osprey lost power shortly after takeoff and sank in the Arabian Sea. A Marine drowned after his life preserver failed to inflate.