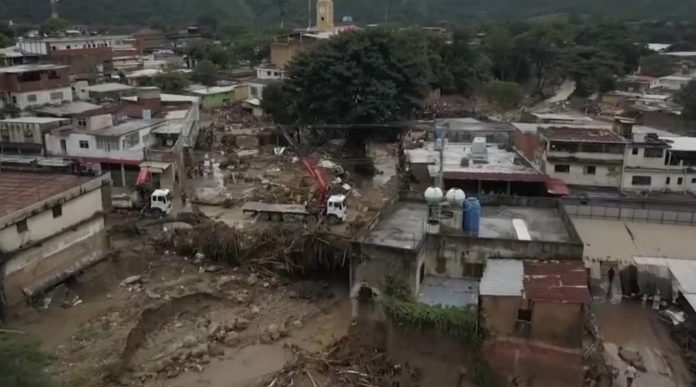 There have been at least 25 deaths and more than 50 missing in Venezuela’s north central state of Aragua after a landslide on Sunday.

There was a heavy downpour on Saturday night, which washed large tree trunks and debris from surrounding mountains into the community of Tejerias, which is 40 miles southwest of Caracas, damaging businesses and farming land as a result.

According to Rodriguez, over a month’s worth of rain had fallen in just eight hours and the pumps used to power the community’s drinking water system had been washed away by flood waters.

As a response to the emergency, Venezuelan President Nicolás Maduro tweeted Sunday that he had ordered the “maximum deployment” of the interior ministry and security agencies.

Carlos Pérez, Deputy Minister for Risk Management and Civil Protection, said more than 1,000 officials from the National Risk Management System are participating in the search and rescue operation.

According to his tweet, the president has also declared three days of national mourning beginning Sunday.

Venezuela has some very challenging terrain when it comes to dense rainfall. Mountains combined with deforestation for farmlands and roads have caused havoc throughout their history.

As many as 30,000 people died in the December 1999 event, in Vargas State, Venezuela, which destroyed thousands of homes and devastated most of the seaside state. There were even two entire towns swept away by the storm.