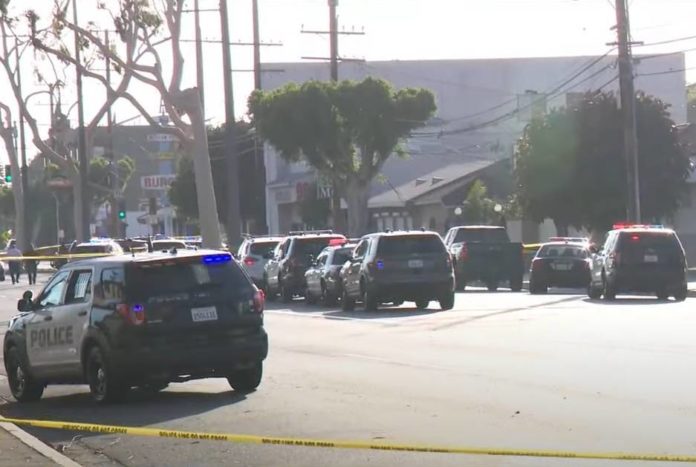 A gunman shot and killed two El Monte police officers Tuesday while responding to a call at a motel. The gunman’s mother confirmed his death Wednesday.

The district attorney’s office identified the gunman as Flores, and said he was on probation for a gun possession offense.

On Monday, a day before the shooting, Flores’ probation officer filed a request with the Los Angeles County Superior Court for a revocation hearing, listing the reason as “desertion.” Two law enforcement sources familiar with the investigation said Flores’ girlfriend last week reported he had assaulted her, triggering a probation violation, but that Flores was not taken into custody.

Juan Hernandez heard a smattering of gunfire shortly after 4:30 p.m. and rushed his two children to a bedroom. He saw a body lying on the pavement near the intersection of Central and Garvey avenues.

Three officers responded to a call for a possible stabbing at a motel, confronted Flores in a motel room, fired their weapons, and were shot dead. Flores was pronounced dead at the scene.

Paredes started as a cadet with the department, was sworn in as a full-time officer in July 2000 and was survived by his wife, daughter and son. Santana was a former deputy sheriff with the San Bernardino County Sheriff’s Department.

Flores was arrested by sheriff’s deputies in March 2020 and charged with being a felon in possession of methamphetamine, a handgun and ammunition. He pleaded no contest to the charges and was sentenced to two years’ probation and 20 days in jail. A sentence that could only be so light under a soft on crime district attorney’s office.

On Wednesday morning, Lupe Morse, 60, walked from the street curb to the front of the El Monte Police Department with a sense of dread. She carried a glass vase with red roses, pink daisies and white lilies to leave in front of a bronze eagle statue.