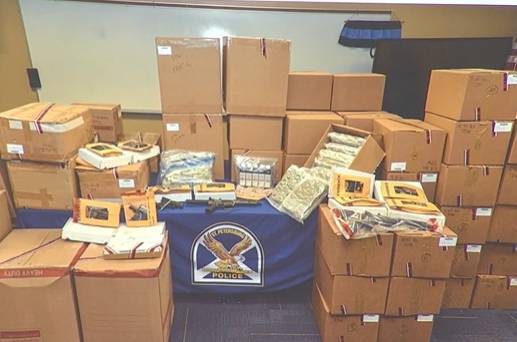 According to St. Petersburg Police Chief Anthony Holloway, the investigation was launched to reduce gun violence in the Tampa Bay area, but ended with local, state, and federal agencies taking down a major regional drug ring.

Holloway told reporters Tuesday that one to two tractor-trailers have been coming from California to Hillsborough County every week since at least January.

According to officials, those shipments will be picked up and delivered throughout the Tampa Bay area and Central Florida.

In January, Chief Holloway said the agency investigated violent crimes and shootings throughout the city. In the end, the vice and narcotics department found the shootings were related to drugs.

Following that, we reached out to other agencies in the area, including the FBI, ATF, Pinellas-Pasco State Attorney’s Office, Clearwater and Tampa police, and the sheriff’s offices in Manatee, Pinellas, and Hillsborough.

“The good thing is that neither these guys nor we know what jurisdictional boundaries are,” said Mark Brutnell, special agent in charge for the Florida Department of Law Enforcement.

The task force connected shell casings from different scenes to the drug ring, which was linked to two shootings, including one in Hillsborough County.

“Some people think it’s just marijuana,” said Hillsborough County Sheriff’s Office Chief Deputy Donna Lusczynski. Over half of Hillsborough County’s homicides are related to marijuana alone, so it is the violence associated with these drugs and their dealers that cause the homicides.”

A total of 130 subpoenas and 130 arrest warrants were issued. 26 suspects were arrested, many of whom are in their 20s or younger. According to Holloway, some of the people arrested are gang members, and he believes the ring is connected to recent shootings involving teens in Pinellas and Hillsborough counties.

There are still officers looking for Jahad Perkins-Edwards, 23, who is wanted on suspicion of selling marijuana and aggravated assault.

“When the next person thinks they’re going to replace this group, we’ll take you down too,” Holloway said.

This is the first of several drug rings they have targeted, Holloway said.

Rather than going after people on the street corner, he explained, “we went after people who caused harm to our community. These are the people who tried to destroy it.”