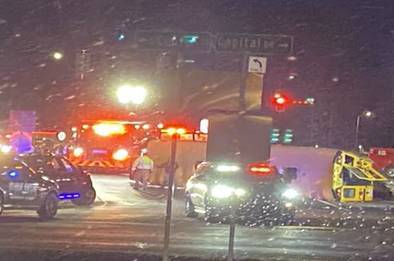 Last night, a bus carrying a high school hockey team from Chicago crashed, leaving many of the passengers with injuries.

Police say a semi-truck hit a school bus carrying 23 students and two coaches in the right rear. The semi struck the bus as it made a left turn onto Center Street from the eastbound left turn lane. At least one juvenile was ejected from the school’s vehicle during the crash.

Three students are in critical condition after sustaining injuries from the semi-truck collision. Out of those who were critically injured, one required surgery. All of the other injured students were taken to a local hospital.

Police say the driver of that semi had been drinking, and the hockey team from Saint Ignatius College Prep in Chicago was returning from a tournament in Culver when the crash happened.

Police said 23 students, two coaches, and the driver were on the bus. The ages of the student hockey players ranged from 14 to 17 years old.

The semi driver was arrested on charges of operating while intoxicated. The school that the hockey team attend will have support counselors available this week to help them process through the traumatic event.

A special mass is being planned for tomorrow afternoon at Saint Ignatius College Prep for the victims of last night’s crash. People are gathering together to pray for the families that were involved in the collision.

One issue that contributes to the problem of dangerous school bus crash injuries is a lack of seat belts. Seat belts are not required in most states including Illinois and Indiana. A Statewide effort to mandate seat belts in Illinois was last introduced in 2017 but never made it out of the rules committee.