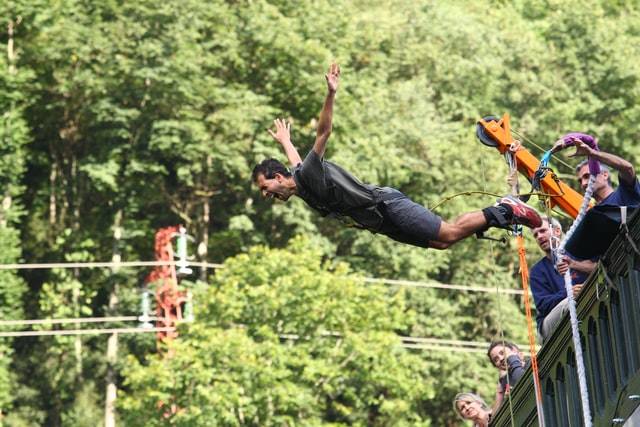 Alexander Muznikas, 33, was convicted of causing death by negligence and offering services that did not meet safety rules in the death of Yevgenia Leontyeva.

Leontyeva’s husband witnessed her fall to her death and yelled “I love you!” seconds before her body struck the concrete pavement.

Leontyeva had been reluctant to make the leap from the rooftop of the Constellation hotel. However,  her friend had made a successful jump. Her instructor had urged her to do the same.

The rope that was supposed to keep Leotyeva fastened was unsafe to use. She fell from the rooftop and hit an iron fence. Onlookers rushed to her aid.

Her husband is seen falling to the ground as Leontyeva falls from the rope-jumping attraction. The bereaved husband said that it was the employee’s fault for not making sure the rope was tied before telling his wife to jump.

Yevgenia suffered a serious skull fracture and brain injuries, and multiple right-sided fractures, and died as surgeons tried to save her.

Her instructor was convicted of offering services which did not meet safety rules and causing death by negligence. The instructor, however, claimed that he never intended to hurt anyone.

Muznikas, the instructor, was convicted of causing death by negligence and was given four years in a medium security jail.

For more updates on this story, check out the news outlets listed below.