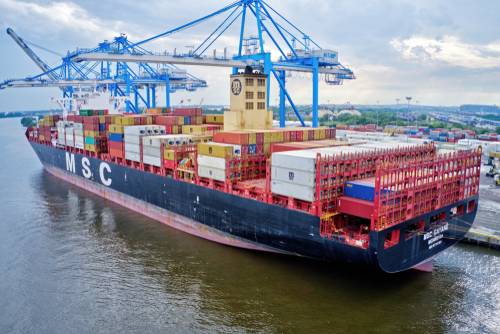 A former professional boxer was arrested on Oct. 30 as he tried to board a flight to Zurich, Switzerland from Miami International Airport. He was charged with trafficking more than 20 tons of cocaine.

Goran Gogic, 43, was the boxer arrested Sunday night for these allegations of trafficking illegal drugs.

The former boxer was allegedly responsible for trafficking a staggering amount of cocaine. He is accused of overseeing the drug shipments aboard cargo ships passing through ports in the United States.

The hard work of federal agents who intercepted these shipments resulted in a body blow to the organization. According to an indictment and court documents, Gogic conspired with others to distribute massive quantities of cocaine via commercial cargo ships.

Law enforcement officers seized three such shipments in 2019 in an effort to hinder these drug traffickers.

On June 19, 2019, nearly 20 tons of cocaine were found hidden on board the MSC Gayane. This shipment of cocaine, worth over $1 billion, was intercepted at the Port of Philadelphia and several crew members were arrested.

Gogic coordinated with every part of the smuggling operation, including the crew aboard commercial cargo ships, the traffickers in Colombia, the speed boat workers who loaded the drugs onto the ships, and the dock workers in Europe.

Gogic was detained after appearing in federal court in Miami on Monday and has a detention hearing set for November 7, but the date is subject to change.

The former boxer’s scheme relied on having access to the ship’s crew, manifest, real-time positioning, and geolocation data and knowledge of legitimate cargo, the DOJ said. If he’s convicted of trafficking this much cocaine, Gogic could be subjected to a long life in prison.

He is charged with conspiracy to violate the Maritime Drug Law Enforcement Act and faces a minimum of 10 years in prison. However, depending on the outcome of his trial, he could be potentially be facing a life sentence for his drug-related crimes.