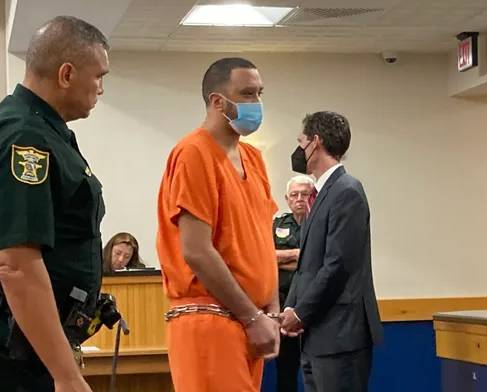 Keoki Hilo Demich, 34, was sentenced to life without parole for the murder of Cynthia Cole. He was also sentenced for grand theft and grand theft of a motor vehicle.

Prosecutors declared their intent to seek a state execution for Demich, of Stuart, a day after a Martin County grand jury indicted him of first-degree murder in the homicide of Cynthia Cole. Demich stood as three of Cole’s children addressed the court.

Demich went to Cole’s home in Jensen Beach and waited for her to arrive home before slamming her into a door and sexually battering her. He then drowned her and sexually abused her again.

Demich accepted responsibility for killing Cynthia Cole and will spend the rest of his life in prison, according to the assistant public defender.

Daughter Ashley Bevensee said Demich had been in their lives for years and they met him many times. She said they’re the same age and that he told her Cole was “like a second mother to him throughout the years.”

Bevensee found Christmas cards from Demich indicating he loved her and was grateful for her being in his life.

“I will never understand how you do this to someone who you call a second mother,” she said.

Bevensee said she now sees monsters behind her shower curtain and under her bed and that it has broken her family.

Cynthia Cole’s friends reported her missing after she disappeared on Feb. 24, and investigators determined Demich had been a “longtime friend” of Cole’s. Dimech was interviewed several times before and after Cole’s body was discovered.

Cole’s death was ruled a homicide by the Chief Medical Examiner Patricia Aronica. She had multiple injuries, including a broken nose, fractured ribs, and contusions.

Assistant State Attorney Nita Denton read a statement from one of Cole’s sons, Dustin Bevensee, who said his mother was “robbed” from their family and that his 8-month-old daughter never got to meet her grandmother.

After the court proceeding, Denton said hastened resolutions to homicides have occurred and that Johnny Manord accepted a negotiated plea deal in which he would serve three consecutive life sentences.