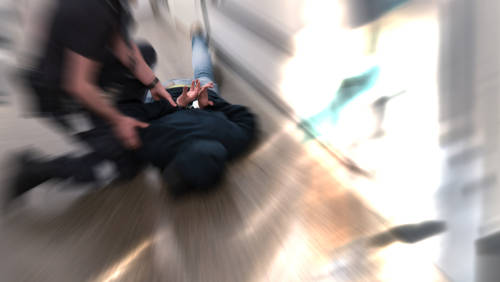 A group of seven men hurled glass bottles at officers from the NYPD during an arrest in the Bronx that turned violent and out of control. Four officers sustained minor injuries, and four men were issued summonses, according to the NYPD.

Police say they were responding to a large group gathered at East 168th Street and Sheridan Avenue in the Bronx, drinking, playing loud music, blocking the sidewalk, and being disorderly. A man was thrown to the ground by an officer, and violence soon escalated.

A nearby man began punching an officer, and several more began throwing glass bottles at them. One of the men in this altercation began to flee, and officers later discovered that he was armed with a loaded firearm.

Police are asking the public for help in identifying seven individuals responsible for throwing glass at a police officer. Four officers suffered minor injuries and three men were arrested and face charges including criminal possession of a weapon and resisting arrest.

This video showing NYPD cops being pelted with bottles as they scuffle with a crowd in the Bronx has gone viral.

The NYPD Commissioner said she was revolted by the scene captured on camera. Police union officials said that the incident is a sign of a declining situation in the city.

Anyone with information about the individuals seen in the videos is asked to call Crime Stoppers.

For additional details on this story, check out the news outlets listed below.