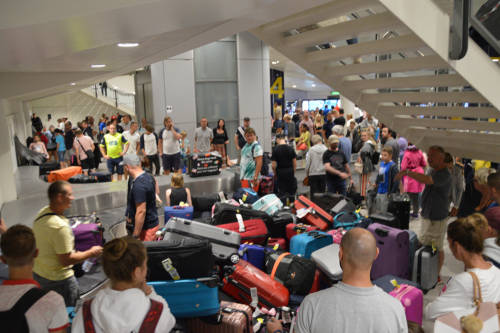 A 37-year-old woman shot several gunshots into the air at Dallas Love Field Airport on Monday before police shot her and took her into custody. No one else was injured.

The incident sparked chaos at the airport as people fled. Michael Loewinsohn took video showing a number of people sitting on the ground between the building and the tarmac.

Johnny Mojica told CNN that he was waiting for a flight at Gate 12 when he saw people running. He said that “everything is calm and safe inside the airport” and that people around him were shaken up but safe.

A police response was seen in aerial footage from a news helicopter over Dallas Love Field Airport.

The 37-year-old female shooter was dropped off at the airport, went into a restroom, changed her clothing, then produced a handgun and began firing. An officer engaged the woman, striking her in the lower extremities.

Authorities say that the woman was firing at the ceiling when she revealed that she had a handgun. The incident is still being investigated by police.

People were evacuated from the airport and hundreds of people waiting outside for the building to be cleared. All of the travelers were re-screened by TSA upon entry to ensure another incident wouldn’t occur.

@DallasLoveField what just happened? A group of people were running and yelling “run” and we all immediately took cover. Nothing has been communicated to us. Everything seems to be calm now. It was most certainly a scary experience for all. @SouthwestAir pic.twitter.com/zU7QLhFV4C

For more updates on this story, consider the news outlets listed below to stay in the know.