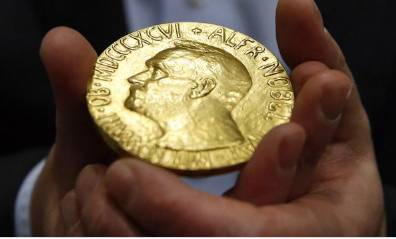 The auction held by Heritage Auctions raised a record-shattering $103.5 million from an anonymous bidder.

Dmitry Muratov already pledged all of the auction’s proceeds to UNICEF to assist child refugees from Ukraine. In fact, before the auction had started he already donated his $500K Nobel Peace Prize cash to the cause.

Muratov is the co-founder of the independent Novaya Gazeta newspaper, which was critical of Putin’s war in Ukraine and was forced shuttered by Moscow authorities when the Kremlin cracked down on dissenting opinions.

BREAKING: Dmitry Muratov, the editor-in-chief of the independent Russian newspaper Novaya Gazeta has auctioned off his #NobelPeacePrize medal for $103.5 million, all proceeds go toward helping Ukrainian refugees. HERO. 👏 #DmitryMuratov pic.twitter.com/PL8StqnIW7

More than 13 million people have fled their homes since Russia’s invasion of Ukraine, the UN says.

The UN says more than 4.9 million Ukrainian refugees have been recorded across Europe, and that 3.2 million have applied for temporary residence. Some have travelled to Russia from the pro-Russian regions of Luhansk and Donetsk.

The EU has granted Ukrainians the right to stay and work throughout its 27 member nations for up to three years. They are given food and medical care, and information about onward travel.

As of 9 June, more than 2.3 million people had crossed into Ukraine from Russia, but the UN says this does not include individual refugees.

The UN’s International Organisation for Migration said that more than eight million people are internally displaced in Ukraine.

More than half of the people who are internally displaced are women, and many are particularly vulnerable.

After criticism, the UK introduced a scheme to allow Ukrainians without relatives in the UK to settle in the UK. Hosts receive £350 a month and are vetted.