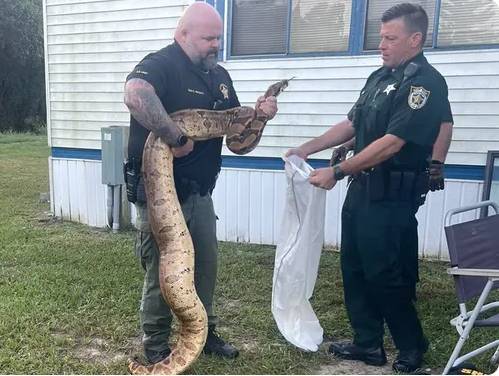 The slithery suspect was captured from the Tall Pines neighborhood on Oct. 28 by Agriculture Deputy Clay Mangrum.

While Mangrum is well-acquainted with snakes, he had never removed a boa before.

He said he grabbed the snake behind its head, then pulled it from where it was hiding and gained some control of its body. Other deputies assisted by holding the snake bag.

When the snake was spotted on the side of a modular trailer between some bends, deputies received a 911 call.

The snake was large, but Mangrum did not realize how large it was.

Being from South Florida and growing up there, snakes have always been part of my life. “I used to have snakes when I was a kid,” he said. “I had never handled a snake of this size before and had never handled a large Boa” “It was certainly an exciting experience.”

Whenever a deputy responds to a call about a snake in a populated neighborhood, they determine whether it poses an immediate threat or is merely a nuisance. In this case, it was a very large non-indigenous red tail boa.

“After advising deputies in the area that I was en route to capture and identify the snake, I realized what I was dealing with and jumped headfirst into the situation,” he said.

The FWC says that boa constrictors are native to Central and South America, where they can sometimes reach a length of 13 feet.

A FWC Exotic Pet Amnesty Program can help people find pre-approved, qualified adopters if they have a nonnative pet they cannot care for.