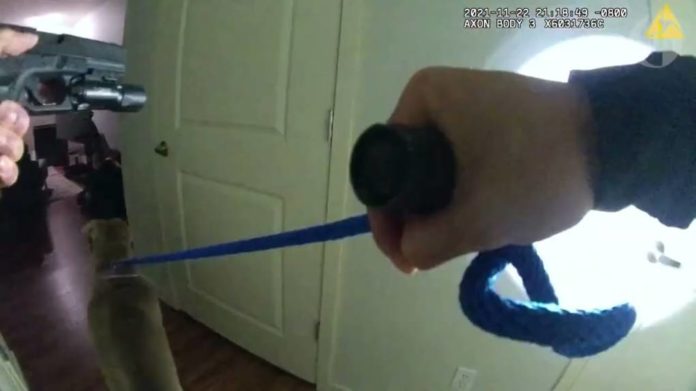 Officer Clement Lau stopped Garcia in his patrol car after discovering she had a warrant in Texas for felony first-degree theft. He then arrested Garcia and took her to the police department, where she repeatedly said she was worried about her two dogs at home.

Gladstone Police Officers stopped at Garcia’s home to secure her dogs. Garcia walked upstairs to get a leash, but grabbed a 9 mm handgun instead and fired at an officer, the body cam footage showed.

Authorities said Garcia refused to drop her gun and was shot multiple times by officers. One officer sustained a permanent injury to his leg.

Garcia was shot multiple times and suffered severe injuries in her leg, spine, arm and abdomen, her lawyer said. She was taken to the hospital for treatment.

Garcia was sentenced to 10 years in prison for attempted aggravated murder and must pay a $50,000 compensatory fine. Texas officials intend to extradite Garcia.

The officer that was shot said the gunshot wounds forced him to leave his 20-year career in law enforcement and that his children don’t understand why Garcia would do something that causes him so much pain.

For more updates on this shocking story, check out the news outlets listed below to stay in the know.