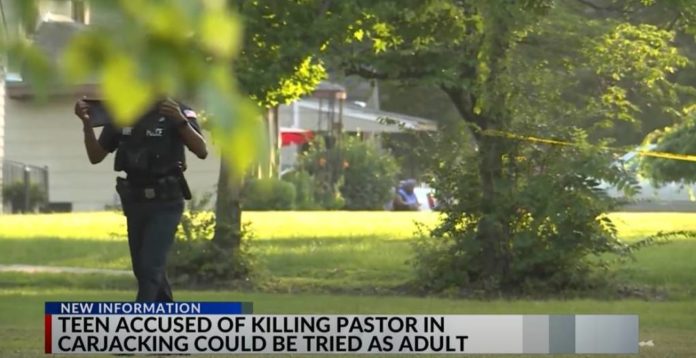 A second teen has been arrested in connection to the murder of a Memphis pastor.

Rev. Altura Eason-Williams was shot multiple times during a carjacking in Whitehaven on July 18. She later died at a hospital, Memphis Police said.

A 15-year-old, Miguel Andrade, was previously arrested and charged with her murder.

Another 15-year-old, Brayan Carrillo, has been arrested concerning  Eason-Williams’ death.

Shelby County District Attorney Amy Weirich said her office would seek to try Carrillo as an adult for Eason-Williams’ carjacking and murder.

Juveniles between 14 and 17 who are charged with serious crimes are eligible to transfer to adult court, and Weirich said she believes this case fits into that description.

“Because of the facts, the serious nature of this case, and the offender’s criminal history, I am seeking transfer of this case to adult court as well,” Weirich said in a press release.

MPD said Carrillo was developed as a suspect on July 22.

Tillman Station Task Force, and Homicide investigators went to Carrillo’s home in the 4200 Block of Tutwiler Avenue. Carillo was not at home, but investigators made contact by phone. Carillo agreed to meet with investigators and was placed into custody, police said.

Andrade was charged with First Degree Murder, Murder in the Perpetration of a Robbery, Especially Aggravated Robbery, Carjacking, and Employment of a Firearm during a felony

Weirich has already announced that her office will seek to try Andrade as an adult, as well, for the murder of Eason-Williams.