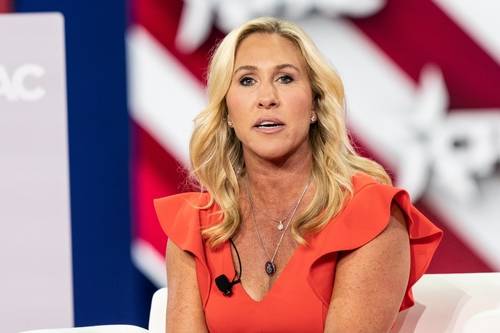 A Gen-Z activist claims that Rep. Marjorie Taylor Greene (R-Ga.) kicked her outside the Capitol while they were having a conversation about gun violence. A spokesman for Greene disputed the claims.

The activist, who is from Voters of Tomorrow, films Greene as she replies to a question about gun legislation. Greene tweeted the clip on Twitter and said that gun control will not create a utopian society.

These foolish cowards want the government to take away guns & the rights of parents to defend their children in schools.

You have to be an idiot to think gun control will create a utopian society where criminals disarm themselves and obey the law.

Greene and Voters of Tomorrow posted videos to Twitter of Greene leaving a news conference while being questioned by activists about gun violence. Greene appears to step on the activist’s foot.

The incident occurred after the House’s conservative Freedom Caucus held a news conference to discuss a government funding bill being debated in the Senate. A group of activists approached Greene and asked to take a photo.

This is not the first controversy that Greene has had in encounters with activists. Greene harassed David Hogg, a gun-control activist, before she was elected to Congress. Greene she also accused Ocasio-Cortez of supporting “terrorists” in a 2021 hallway encounter, which led to Ocasio-Cortez calling on congressional leadership to review its security posture to protect elected officials.

For additional information on this controversial interaction, please consider the news outlets listed below to stay in the know.