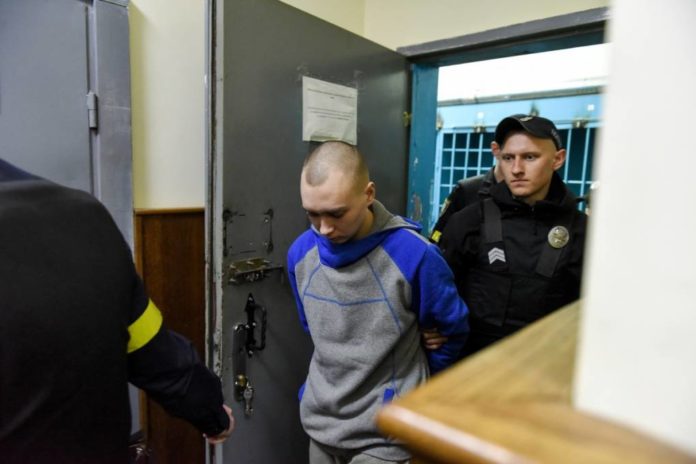 A Russian soldier pleaded guilty to shooting an unarmed civilian in the northeastern Sumy region four days after the invasion began. The soldier said he was ordered to kill the man so he could not report the Russian soldiers to Ukrainian military authorities.

The European Union is offering $526 million to help member countries replenish their stocks of ammunition and military equipment that each sent to Ukraine.

Russia may have agreed to a conditional surrender of the Azovstal steel mill defenders to hasten the invasion of Mariupol.

The U.S. embassy in Kyiv has reopened after being temporarily relocated to Lviv and neighboring Poland. The State Department said the Ukrainian people had defended their homeland with U.S. security assistance.

The European Union on Wednesday unveiled a $316 billion plan to become independent of Russian energy by 2030. The plan calls for easing approval procedures for renewable energy projects and requiring solar panels on some roofs. This doesn’t explain however how they replace the supply of Russian natural gas. Something that will be a major issue come the winter time.

Amnesty International said 1,000 Ukrainian soldiers have surrendered since Monday in Maripul, raising concerns over their fate as prisoners of war. The group documented summary killings of captives by Russia-backed separatist forces in eastern Ukraine.

A pro-government Turkish newspaper listed 10 demands on Sweden and Finland before they would approve their NATO membership. The demands include halting financial support for the PKK and Syrian Kurdish fighters.

Turkish President Erdogan is expected to use his leverage with other NATO countries to extract concessions and guarantees from them before Finland and Sweden are admitted.

The U.S. has not established regular contact with Brittney Griner, the WNBA star who has been detained in Russia since February. She faces drug smuggling charges that carry a maximum penalty of 10 years in prison.

To read more updates on the war consider these sources: