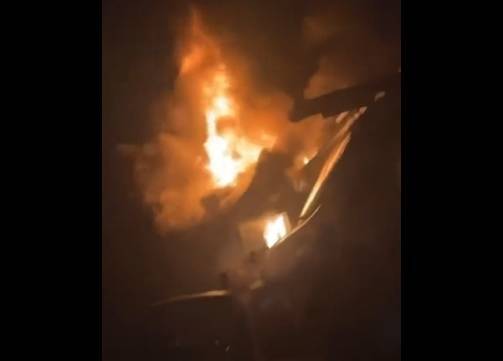 The city of Keene reports that those aboard a plane that crashed into a building on Friday have died.

On Friday evening, a Beechcraft Sierra single-engine aircraft crashed north of the Dillant-Hopkins Airport in Keene.

According to the city of Keene, no one was injured in the multifamily building, but those on the plane died.

“It will be investigated by the FAA and the National Transportation Safety Board. The NTSB will provide additional updates as the investigation progresses,” the FAA stated.

Swanzey Police Department posted on Facebook that first responders are at the scene of a plane crash.

There was a serious incident near the Swanzey line on Route 12 in Keene, police said.

The investigation will be taken over by federal officials, Keene Police Capt. Steve Tenney said.

Angel Brown, a witness, said she saw the crash from her living room.

“After hearing the plane and a crash, I rushed to my kitchen to prepare for work and saw flames from my back window,” Brown said.

When the crash occurred, Scott Gauthier said his mom yelled at him to get out of the house.

“When I ran out, I saw the entire barn area already engulfed with flames,” Gauthier said.

Shaughn Calkins said he was driving by when he saw the fire.

It was probably close to a quarter mile away, and you could feel the heat coming from the fire,” Calkins said. “It was billowing, so it was a big fire.”

Six Red Cross staff members are on the scene to assist.

“The Red Cross Disaster Action Team is mobilizing, and we’re waiting to hear more about what the community needs,” it said.