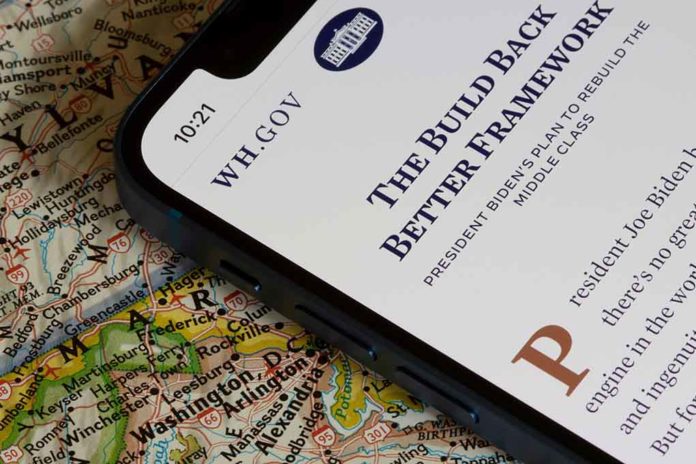 (InformingNews.com) – Since taking office, President Joe Biden has been pushing his Build Back Better plan, but there has been some hesitance within his party to pass the massive spending bill. Senator Joe Manchin (D-WV) has been the most outspoken against the legislation. With an announcement on December 19, it looks as if the senator has single-handedly ended any hopes for passing the act.

Senator Manchin released a statement alerting the American people and his fellow congressmen and women that he will not vote in favor of the Build Back Better Act. He said he’s committed over five months to working with the president, Senate Majority Leader Chuck Schumer (D-NY), and Speaker of the House Nancy Pelosi (D-CA) to move forward. Still, there is no way he can justify supporting the bill.

Manchin explained he’s had serious concerns, which have only intensified with time. The senator stated he’s committed to his constituents and would never do anything against their best interests.

He went on that the Build Back Better Act does not support what is right for the people of West Virginia, explaining it reshapes America in a harmful way that leaves the country vulnerable. It is not a risk he’s willing to take.

The bill would only increase inflation taxes and the national debt to levels that will hit working Americans too hard. Amid rising tensions with China and Russia, a huge debt like this would only hinder the ability of the United States to respond and react to protect its people. It will increase the reliance on foreign energy and reduce the country’s electric grid stability.

He also felt there was a lack of transparency on the actual cost of the bill. The Congressional Budget Office came back with a price tag over double the promised amount, which he said shows supporters are trying to hide the impact.

The senator promised to continue to work through bipartisan efforts to address issues without putting the country at risk.

Republicans have opposed the legislation from the beginning, and they are cheering on Manchin for standing up for the American people.

Donald Trump Jr. said the senator is operating as a moderate, which Biden pretended he would do on the campaign trail, and gave the senator credit for standing up for the people he represents.

Kyle LaBrue (R), candidate for Missouri’s 4th congressional district, said Manchin demonstrates a wake-up within the left that Americans no longer support its radical policies. Bo Hines (R), candidate for North Carolina’s 7th congressional district, confirmed that the decision shows the senator understands what the people want and knows that his time in Washington would be over if he voted in favor.

Manchin’s fellow democrats see the Build Back Better Act as an essential part of Joe Biden’s agenda and are unsurprisingly unhappy with him.

Representative Ilhan Omar (D-MN) said his decision will harm the people of his state and keep them from the benefits of the bill’s expansions of Medicare, childcare and long-term care. Senator Bernie Sanders (I-VT) expects Manchin to vote no on the floor, saying the West Virginia senator lacks courage and his constituents deserve better.

Representative Ayanna Pressley (D-MA) accused Manchin of purposely blocking the agenda of the President and never intending to negotiate in good faith.

The Senate is at a 50/50 split with the tie-breaking vote belonging to Vice President Kamala Harris. Without Manchin’s vote, Democrats cannot push the bill to a tiebreaker to pass it, and it will fail on the Senate floor.