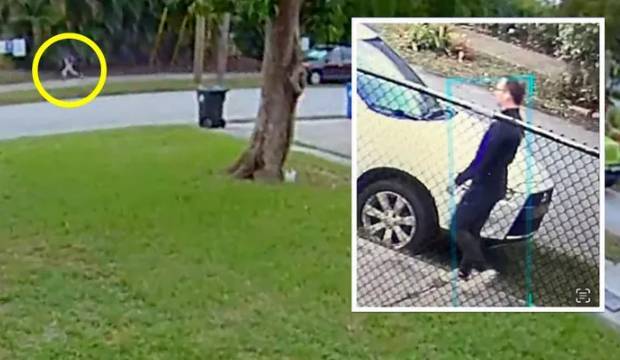 Police in Fort Lauderdale, Florida, are offering a $5,000 reward in the case of a 10-year-old Fort Lauderdale girl who escaped two kidnap attempts on her way to school last week.

A home security camera recorded a portion of one of the two incidents, showing the girl sprinting down a suburban street before stopping to catch her breath for a few seconds, before continuing on.

During her walk to school Wednesday, an unidentified adult male attempted to lure the girl with candy, money, and other bait.

The victim refused, but he “attempted to grab her,” according to authorities. The victim slipped away and told police he was driving a black work van without windows.

According to police, he tried again the next morning.

“This young girl was approached by the same male while walking to school,” police said in a statement. “She immediately fled towards school.”

A White male between the ages of 30 and 40 with receding brown hair and a medium build is described as the suspect. He stands between 5 feet, 10 inches and six feet tall.

On Monday evening, they released an updated flyer showing a rendering of the suspect vehicle. The rear taillights may have been damaged.

It appears the suspect may be balding on the back of his head. He was wearing shades, a dark long-sleeve shirt, black jeans, and white sneakers.

“Police are concerned about these incidents, and we need your help finding the culprit,” they said.

“This is being considered an attempted abduction based on the circumstances. If you recognize the male or the van, or if you have video of either incident, please call Detective Tiana DeQuarto at 954-828-6559.”