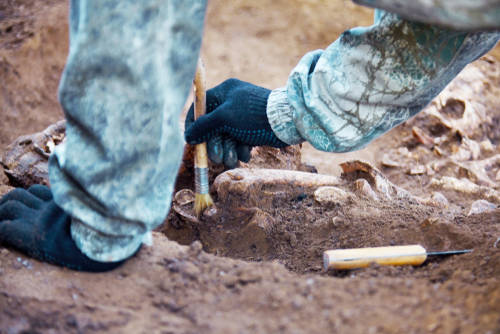 According to archaeologists in Georgia, the region contained one of the earliest prehistoric human settlements in Europe, possibly anywhere outside Africa, because of the discovery of a 1.8-million-year-old tooth belonging to a primitive human species.

Human skulls dated to 1.8 million years old were discovered near Dmanisi in the late 1990s and early 2000s near the Georgian capital of Tbilisi, near the village of Orozmani.

Scientists’ understanding of early human evolution and migration patterns was changed by the Dmanisi finds, which were the oldest known to exist outside Africa.

A recent discovery 15 miles away provides further evidence that the mountainous south Caucasus region was one of the first places early humans settled after migrating out of Africa.

In announcing the discovery of the tooth, Georgia’s National Research Center of Archeology and Prehistory stated that Orozmani and Dmanisi represent the world’s oldest distribution of old humans – or early Homo – outside of Africa.

The geologist who led the dig team believes the tooth belonged to a “cousin” of Zezva and Mzia, two near-complete fossilised skulls found that date back to 1.8 million years ago.

“The implications, not just for this site, but for Georgia and the story of humans leaving Africa 1.8 million years ago are enormous,” said British archaeology student Jack Peart, who discovered the tooth in Orozmani.

“It solidifies Georgia as a really important place for paleoanthropology and the human story in general,” he told Reuters.

One of the oldest Homo fossils has been found in Ethiopia dating back to 2.8 million years ago.