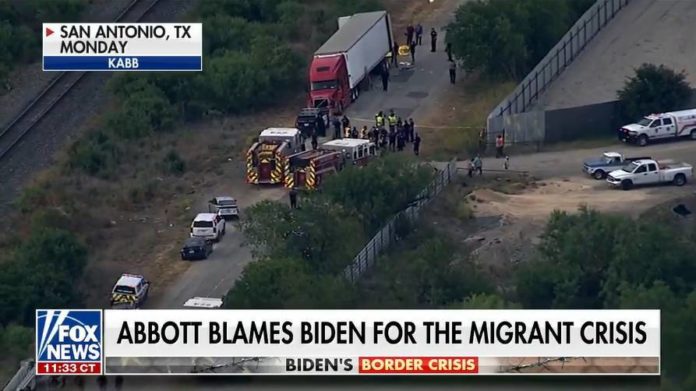 Texas Gov. Greg Abbott issued an executive order Thursday that allows law enforcement to return illegal immigrants to the border. The order comes at a time of historic migrant encounters at the border.

“Texas is stepping up to protect Americans and secure our southern border, as President Biden refuses to enforce the immigration laws enacted by Congress.” – Abbott said.

Abbott said the Texas National Guard and Texas Department of Public Safety would begin returning illegal immigrants to the border.

Texas has sued the Biden administration over several policies, including the Remain-in-Mexico policy. The high court ultimately decided the administration can end the program.

Abbott’s order comes after multiple Texas counties declared the crisis an “invasion” and urged Abbott to do the same. A number of House lawmakers have also called for such a move.

Texas is dealing with an invasion, said Abbott, because fentanyl is pouring into our communities. Abbott’s executive order mentioned the word “invasion”, but the Center for Renewing America dismissed the order.

Russ Vought and Ken Cuccinelli said the governor should have declared an invasion, but instead directed the National Guard and DPS to remove illegals to Mexico.

Arizona AG Mark Brnovich is encouraging Arizona Governor Doug Ducey to declare the border in Arizona an invasion as well to expand protective powers of the national guard.

Fentanyl is a particularly deadly street narcotic that is made in China and smuggled into the United States via cartel traffickers through the southern border. The drug was responsible for over 100,000 deaths in 2021. Exceeding the 2020 numbers by almost double. Known as ‘blue’ on the streets for its most often blue color when in pill form it is 100 times more pottant than its predecessor OxyContin.