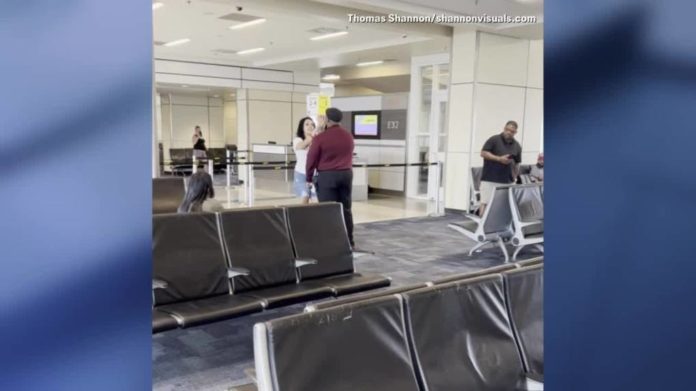 A fight broke out between a Spirit Airlines supervisor and a passenger at DFW Airport on August 11, 2022. The Spirit Airlines agent was caught on tape fighting with a female passenger with camera footage that was released this past Friday.

The employee dressed in a maroon shirt was yelling at the woman, saying “you have lost your mind” and “don’t you touch me ever in your life”. The woman then pushes the man and screams obscenities at him.

The woman used racial and homophobic slurs, yelling the N-word as she attacked him. She continually pushed and slapped the agent. The Spirit Airlines employee then punched her in the head and responded aggressively to security employees that stepped.

Spirit Airlines and the DFW airport told WFAA they were aware of the altercation and were working with local law enforcement to investigate the matter.

According to police, Sullivan said that Davis pushed him after he told her there was no seat for her on the plane. Davis claimed that Sullivan had pushed her for no reason, but a witness corroborated Sullivan’s account.

Viewers of this viral footage were split between supporting the Spirit Airline employee and defending the passenger.

For more details on this viral footage, check out the news sources listed below to stay in the know.