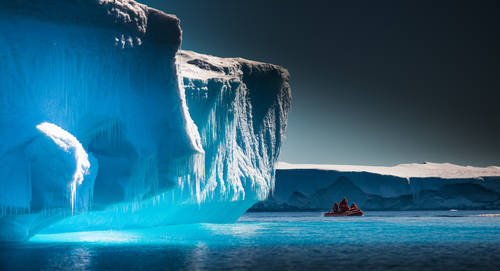 Scientists found that the glacier’s base dislodged from the seabed and retreated at a rate of 1.3 miles per year.

The Thwaites glacier could retreat rapidly in the near future once it recedes past a seabed ridge that is helping to keep it in check.

The Thwaites Glacier, capable of raising sea level by several feet, is eroding along its underwater base as the planet warms. In a study published Monday in the journal Nature Geoscience, scientists mapped the glacier’s historical retreat, hoping to learn from its past what the glacier will likely do in the future.

The West Antarctic ice sheet, which holds enough ice to raise sea level by 16 feet, has been closely monitored as the climate crisis has accelerated.

Researchers questioned whether the Thwaites Glacier was at high risk of collapse in 1973 and found that warm ocean currents could melt the glacier from underneath.

Researchers discovered that the Thwaites glacier was retreating rapidly and that warm water was melting it from underneath.

Monday’s findings suggest that the Thwaites glacier could recede much faster than previously thought, and scientists hope to return soon to gather samples from the seabed. The current estimate could spell disasterous sea level rise in 5-15 years.