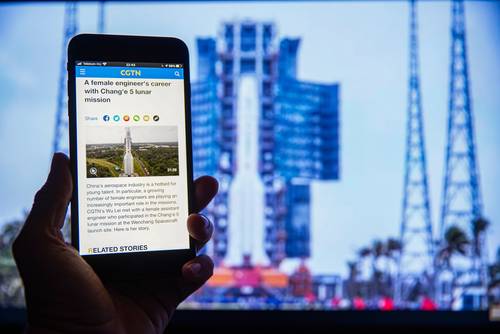 On Friday morning, a Chinese rocket booster plummeted into the Pacific Ocean.

In the early morning hours of April 1, the debris from the Long March 5B rocket re-entered the Earth’s atmosphere over the south-central Pacific Ocean. The US Space command reported.

Five minutes after the rocket had exited the Space Command Area of Responsibility, the agency confirmed a second atmospheric entry correlated with the rocket.

Hundreds of flights were delayed as a result of Spain temporarily closing the airspace over Catalonia and three other regions.

The Mengtian module of China’s Tiangong space station was launched into orbit by the country’s most powerful rocket in October.

Chinese scientists have been playing roulette with the core stage before, as it was allowed to reach orbit without a system guiding it back to Earth.

There had been four uncontrolled re-entries since 2020.

A 25-ton core from a Long March 5B fell into the Indian Ocean in July.

He also said China was taking unnecessary risks by letting rocket stages reenter uncontrolled on Friday, according to an emailed statement.

“They did not share specific trajectory information, which is needed to predict landing zones and reduce risk. This is the PRC’s fourth uncontrolled re-entry since May 2020, and each of these re-entries have been the largest in last 30 years,” he said. “It is critical that all spacefaring nations are responsible and transparent in their space activities and follow established best practices, especially, for the uncontrolled re-entry of a large rocket body debris – debris that could very well result in major damage or loss of life.”

In an interview with The New York Times, Zhao Lijian, a spokesman for the Chinese foreign ministry, said the rockets were designed with “special technology.”