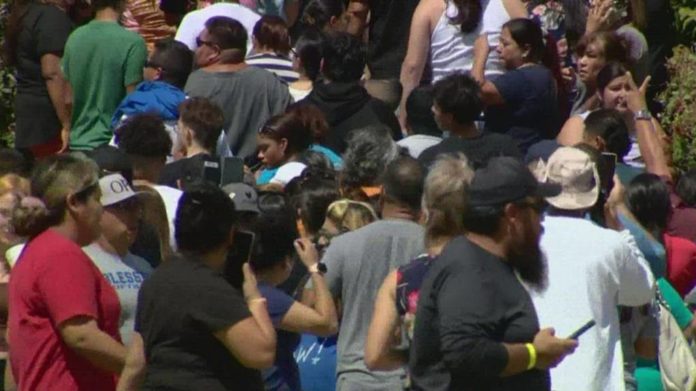 Police were called to Thomas Jefferson High School in San Antonio about a possible shooting. They found no evidence of an active threat.

Nearly 90 officers from the school district and SAPD responded to the scene. Parents and families wanted to get their children, but were seemingly outmatched by officers.

The San Antonio Independent School District police established there was no shooting, but some students had an altercation. Frightened students called their parents, who descended en masse on the school where 29 school district officers and 58 city police officers were on hand.

SAPD said some individuals became unruly and a man with a knife broke a window, cutting his arm. He was taken to the hospital with non-life-threatening injuries.

The school district deployed staff on campus grounds to inform families of what’s happening and how parents can reunite with kids.

At the root of Tuesday’s conflict were fears stemming from the May 24 mass shooting at Robb Elementary School in Uvalde, where 19 students and two teachers were killed.

The chaos eventually calmed down at Jefferson High School, and police found no evidence of an active shooter. All students are safe.

A wave of threats has caused school shutdowns in Texas, California, Massachusetts, Florida, Arkansas, Oregon, Illinois, Kansas and Oklahoma since the May 24 mass shooting.

For more information on this story, please consider the news outlets listed below.