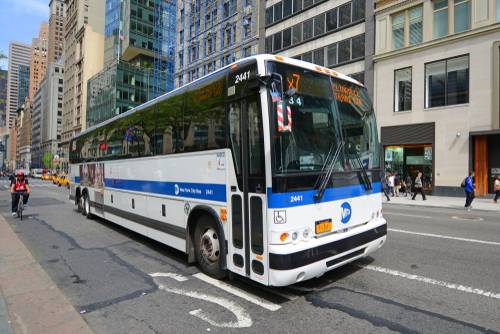 Dwayne Gaddy has been charged with grand larceny, robbery, reckless endangerment, and other crimes after commandeering a crowded MTA bus in Cambria Heights on Thursday morning. The defendant was charged appropriately for his actions, which endangered dozens of commuters and further undermined the sense of safety when using public transit.

Gaddy, 44, of St. Albans, Queens, was arraigned this morning on a 10-count complaint charging him with grand larceny, robbery, assault, reckless endangerment, unlawful imprisonment, and criminal possession of a weapon.

On October 27, 2022, the defendant ran in front of an eastbound Q4 MTA bus and demanded to be let on board. The defendant allegedly pointed a gun at the bus operator and demanded the driver continue driving the empty bus. He said that there were people trying to kill him, motivating him to hijack the bus as a form of self-protection.

The driver continued turning down several streets to avoid the individuals the defendant claimed were trying to kill him.

According to the complaint, a defendant attempted to take the steering wheel of a bus, lost control of the bus, and crashed into a utility pole. The bus operator was treated for bruising to his elbow and hip, lacerations and abrasions to his arm and finger and substantial pain.

The investigation was conducted by Police Officer Amber Harrison and is being handled by the District Attorney’s Supreme Court Trial Division.

Police said Gaddy told them the gun was not a real firearm and claimed that the bus driver had no reason to be scared. The police recovered the weapon that Gaddy used during the criminal incident and discovered that it was, in fact, a BB gun. However, the mild nature of the weapon doesn’t discount the threats that Gaddy made to the bus driver and the danger he put everyone in by hijacking the vehicle.