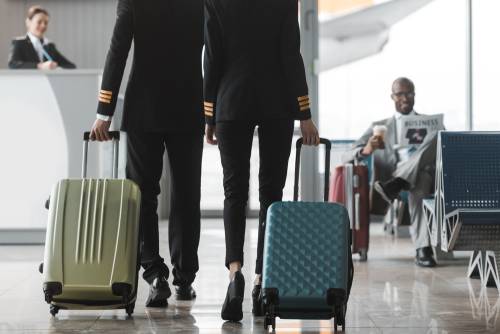 A CBP officer conducted a random check on two off-duty Delta flight attendants and found Ketamine, Methamphetamine, and GBL in their luggage. The two have been suspended pending the outcome of an investigation.

CBP officers arrested two US Citizens on Tuesday for possession and transportation of narcotics. Marcelo Chaves, 44, and Ronald Maldonado, 35, were the suspects that were arrested at Miami International Airport.

Two days after being arrested for smuggling drugs into the US, flight attendants Marcelo Chaves and his boyfriend Ronald Maldonado appeared in a South Florida bond court. The couple is now facing felony drug trafficking charges after Delta Air Lines found drugs in their baggage.

Local 10 News reached out to American Airlines for a statement about Chaves’ arrest, but a company spokesperson directed us to a federal agency, who could not comment.

Chaves said he has lived in New York and New Jersey for 12 years and that he has been working as a flight attendant. The judge ordered a Nebbia hearing, but it was not mentioned during bond court.

Because Chaves and Maldonado were both arrested on drug trafficking charges in South Florida, they were ordered to post $115,000 bonds each.

This is not the only flight attendant scam to have been caught by investigators this year.

Ricardo Guedes, an ex-United Arlines flight attendant, was sentenced to more than one year in prison, a year of supervised release, and potential deportation. He received this sentencing for making false statements on his passport application, pretending to live under a different name for about 20 years.

The ex-United Airlines flight attendant pleaded guilty to identity theft. He was able to obtain a social security card, passport, job, loan, luxury car, and home through the theft of identity.