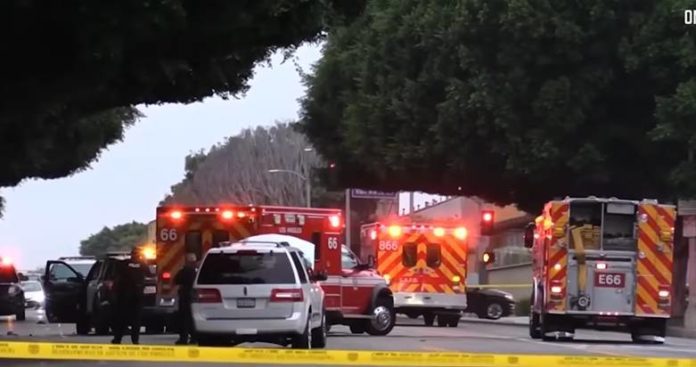 During a chaotic carjacking and chase in the San Fernando Valley, a man sought in a murder and robbery was arrested.

The victim in the carjacking was dragged more than two miles by his own SUV on Inglewood street after being carjacked.

As police conducted a surveillance operation in the 5900 block of 7th Avenue on the wanted man, the deadly chain of events began. In the area, detectives watched the man get into a vehicle and leave.

Attempts to pull the driver over led to a short pursuit, police said. There was a brief chase in Inglewood that ended in a crash at Florence and Haas avenues.

After being entangled in a seatbelt, the carjacking victim was dragged on the street for more than two miles before being dislodged.

A horrifying scene was described by Tina Atkins after picking her children up from an after-school program.

Atkins said, “We just saw a car coming straight at us with a dead body hanging out the bottom.” She added, “That’s why I hopped the curb with my kids in the car, so I wouldn’t be hit.”

In the course of the chase, Atkins’ car and an undercover police vehicle were struck.

When the driver crashed near East Florence Avenue and North Prairie Avenue, near Edward Vincent Jr. Park, the pursuit ended. After the SUV flipped, the man refused to exit, resulting in a standoff near a cemetery.

In the vicinity of where his stolen SUV flipped and came to rest, the victim was found in the street about three houses south of where the vehicle was found. No details were immediately available about the man’s identity.

A short time later, he died.

It was believed that the suspect was involved in the death of a victim during a robbery in Reseda.

Following treatment for a severe facial injury he sustained during the pursuits and wrecks, Joshua Reneau, 31, was expected to be arrested on suspicion of murder.

According to police, the driver of the other vehicle was also taken into custody.

Two men were shot and a security guard returned gunfire at a tattoo and marijuana business on Sherman Way near Reseda Boulevard on July 29, according to police.

The victims, who survived their gunshot wounds, told police three men had robbed them, and about an hour after the gunfight, officers responded to another call in the 18300 block of Saticoy Street in Reseda and found a shooting victim in what was also suspected to have been a jewelry robbery.

After being hospitalized, the 32-year-old man died.

The LAPD and FBI arrested two other suspects in the July holdups and shootings early Thursday morning. Derek Hall, 28, of West Covina, and Miracole Brown, 20, of South Los Angeles, were arrested on suspicion of robbery and murder. A $2 million bail was set.